Overchurch Park is the area of grass and woodland bordered by Royden Road, the Upton By-pass, Moreton Road and the Overchurch Estate, it includes Overchurch Graveyard and the site of the Norman Church. 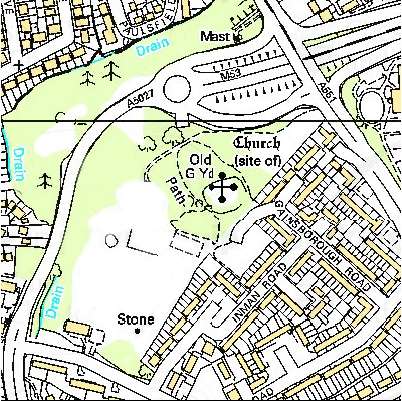 The 1830 Tithe map shows little woodland, and the area is made up, mainly, of parts of three fields: Near Church Hay, Far Church Hay and Great Pit Hay. The fields were owned by Sir Thomas Stanley Massey and farmed by Joseph Broster, who used them for growing wheat.

In 1859 Thomas Webster built a house next to the old graveyard, this was called Overchurch Hill and Overchurch Park became part of the formal gardens and parkland of the house.

Thomas Webster remained in Overchurch Hill until 1915 when it was sold to Mr Paul, who owned the Homepride flour mill on Wallasey's East Float. In 1929, when the World Scout Jaboree was held in Arrowe Park, he provided part of his grounds as an overflow camp. Following the Jamboree, Mr Paul donated the land to the scouts as a permanent camp site.

Mr Paul sold Overchurch Hill and its land in 1947, and the house became a children's home. The house was demolished in the late 1950s.

In 1994 the graveyard and the site of the church were scheduled by English Heritage.